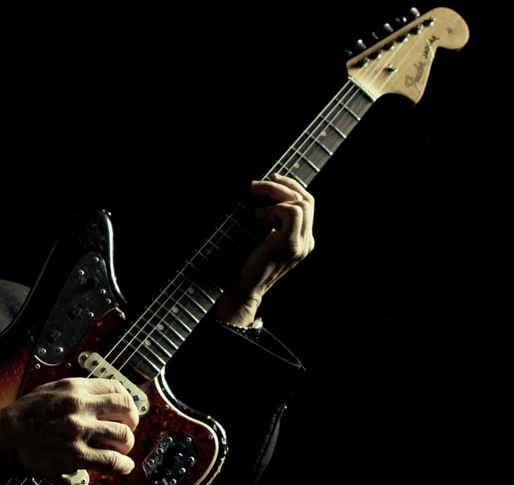 Each melodic phrase begins with a full sounding chord with open strings, taking advantage of the Drop D tuning. The melody is first stated in legato single-note lines while also using open strings to allow for a more varied sound texture. Note how the melody is mostly played on one string, accompanied by open strings or fretted pedal points.

The harmonic progression is a straightforward I (ii V) I progression – in other words: (minor) tonic [I-] – subdominant [ii] – dominant [V].

One of the mentioned nice ‘arrangement touches’ is the voicing for the A7b13 chord. The b13 is placed in a lower register which results in a ‘darker’ sound that fits in nicely with the sound of the tonic chord voicing. Altered chords don’t have to sound ‘harsh’ or pop out too much in a given context.

Another subtle yet hip sounding idea is to pair dyads and let their sounds ‘bleed’ into each other, e.g. a fretted 6s interval vs. a 6th interval on open strings.

This is also possible with fretted notes only, e.g. compare Julian Lage’s idea in his ‘Study for Electric Guitar’ [from ‘Concepts for Solo Guitar Performance], page 54 ‘vocing formulas – 6s’.