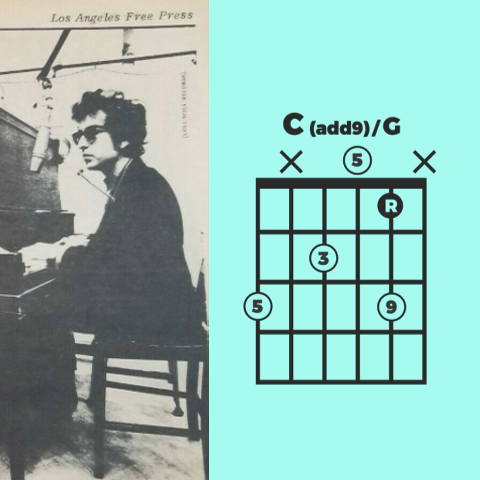 Recap: Musical tension and release keeps your music moving forward and while most of the time this is perceived to be an intuitive concept, knowing the effects and relationships of tonic, subdominant and dominant functions is priceless knowledge to navigate through a given key and to create specific musical effects.

As seen in the previous lesson [ (4) About ‘Gravity’ ] musicians use basic tonic, subdominant and dominant chord voicings as ‘building blocks’ for their performances while recombination is key to create compelling musical effects.

You can blur the lines between functions by adding notes from one function to the chord voicing of another function. E.g. adding an A (9), curtesy of the dominant function [ D ] to the tonic chord [ G ] results in a more open sounding Gadd9 voicing. The same applies for the dominant function in this example: the G bass note, borrowed from the tonic function, creates a Dsus voicing including the chord’s 3rd – a nice ‘unsettled’ sound.

Bob Dylan uses these techniques to great effect throughout his repertoire to create more exciting textures, movement and consistency between basic harmonies: it doesn’t always has to be ‘Giant-Steps-complex’ in order to achieve grande musical effects.

The old ‘less is more’ approach does also apply to the general scale complex – consider to re-evaluate your perception towards the major scale. In tonal music, all other scales are related to the major scale and function in context with its ‘gravitational’ properties.

Playing the scale with unconventional fingerings (including open strings and harmonics), as in the sample above, shows how stable the sonic imprint of the scale and its translation to the fretboard really is. The added Eb, borrowed from the Eb Major scale is another way to create a iV minor function to further extend the sound palette. It is also the root for the bVI secondary dominant in G Major which leads chromatically to the V chord.

2. Ex. : Explore these ‘gravitational’ effects by recombining the harmonies:

This is an approach to establish knowledge and skills for more intentional musical choices: